Louise Grondin is the daughter of dairy farmers and grew up in Saint-Nazaire-de-Berry, Quebec, working on the family farm. Louise recognized early on that she wished to pursue post-secondary education. Excelling in both math and science and fueled by her love of problem solving, she went on to study physics at the University of Ottawa. She later obtained a Master of Sciences degree from McGill and got her credentials as a mechanical engineer from the University of Toronto.

After 12 years working for Ontario Hydro, she switched to mining in 1993. Since 2001, Louise has been working for Agnico Eagle Mines Limited. She was appointed Senior Vice-President of Environmental and Sustainable Development in 2010 and the human resources portfolio was added to her responsibilities in 2016. Louise is a key member of the senior management team that has led the growth of Agnico Eagle from a single mine regional gold producer to a multi-mine international leader in gold mining.

Louise’s passion for contributing and promoting the mining industry garnered her several recognitions, including being named in the top 18 Women of Impact in the Canadian Materials, Metallurgy and Mining field (2015), one of the 100 Global Inspirational Women in Mining (2013) and winning the 2016 Women in Mining Canada Trailblazer Award. 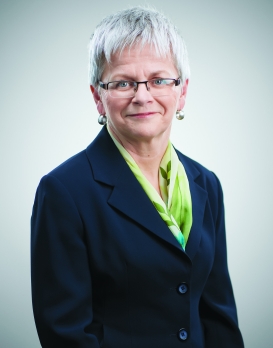 I was married to a mining engineer and we were both working in Toronto. My husband then got transferred to a mine in Abitibi, so we both decided to move from Toronto to a small village of about 300 people. At that time, mining was the only employer in this small village so if you didn’t work in mining, it was very difficult to find a job. I applied for an environmental superintendent position at the Selbaie mine and got the job! This is how I came to be in mining.

My attitude! The one quality I find very important in leaders is being positive and seeing the glass half full instead of half empty. Being positive was a natural attribute for me and people saw that. They also saw someone who could get things done. I am in fact a solution seeker and someone who works really hard and is very driven.

What also played a role in my advancement was the growth of the company. I joined Agnico at a time when there was only one mine in operation and during the first 7 years after I joined, we expanded from 1 to 8 mines. I was there at a good time and could progress very quickly. I evolved from being the regional environmental manager to Vice-President of environment and with time, the health & safety, community relations and more recently HR portfolios were added. As the needs of the company became bigger, management counted on me. They thought that I could do it and look for solutions.

What also helped is the fact that I am a team player. I don’t fight anybody, instead, I make allies; and that’s very important because you’ll need allies to support you along the way. In addition to my personal attributes, the combined strength of my team members and good timing of having joined Agnico at the right time were key ingredients of my career progression!

It’s the positive impact we can have! I work in environment, health & safety, community relations and human resources, this means I work with people: employees and community.

We operate in remote areas and have the potential to make a difference with the people we work with and the communities in which we operate. By providing work to locals, we offer them an opportunity to own a house and send their kids to colleges and universities. We are changing the social landscape of the areas where we operate by creating value for the people. We are in fact extracting value out of rock and transforming it into making good whenever we can; that’s often something people don’t realize. Our potential to have a positive impact in the remote areas where we operate is limitless!

Moreover, when we go in areas where there has been no one before us, we study the environment and provide a lot of scientific information that is very valuable. It is information that universities or governments don’t have the capacity and money to provide so it is our responsibility in our permits to do it.

When I first joined Agnico, we had a problem with our effluent. Our water effluent was toxic and it was a very complex challenge to solve because you had to trace the problem back from the end of the pipe up through the whole process to find out what was contributing to making that water toxic. It was like solving a puzzle!

At that time, I was still new to the company and I had to quickly step in and have meetings with the ministry of the environment to address that challenge. It took us 2 years to implement a biological treatment plant to treat the toxic water. Bacteria are great and they can do miracles! But at the start, when we transferred the process from the laboratory to the pilot plant, the process didn’t work and I remember phoning technicians on weekends to check if there were any improvements. I still remember the day it did work and how proud I felt at that moment.

One of the things I am particularly proud of, and without doing it on purpose, is that I can hear my vision for environmental management and community relations from the mouth of our employees and the community. We recently did a video in Nunavut to celebrate Agnico’s 60th anniversary and after interviewing our employees up there and members of the community and hearing what they thought the company wanted to do in environmental management and community relations, I was amazed to hear that they clearly understood the vision that I had been trying to realize over the years. I might not have a structure on which I can put my name but the fact that the people in the community reflect back to me what I wanted to do is amazing!

I had no one labeled as mentor but I did feel that my bosses had my back. I worked very hard and was very loyal to them. In my youth, I was more impulsive and they taught me to listen more and to think about what could a solution be before jumping into action as soon as there’s a problem. Also, they never doubted me. During meetings when issues were discussed, I would raise my hand to take on a challenge and I was never refused the opportunity to do so. I had a very positive attitude, which lead management to believe in my capacities to do the job.

It’s very difficult! You’ve got to adapt your career to leave space for your family. When I had my children, I was on an 8 to 4 schedule and I would work when the kids went to bed. You’ve got to manage and people nowadays are much more understanding than back in the old days. There’s almost no difference today between men and women, they both have to pick up the kids, cook and put them to sleep. When I was younger, it was more difficult but I was still able to deliver. If you are passionate about something, you find a way to make things work and I guess that I didn’t give a too bad example: both my children are now in mining! I also have to add that my husband has always believed in me and was very supportive! We were never in competition with each other, but always partners.

Looking at the population, it is made up of 50% women and 50% men. Mining companies need to welcome a more representative proportion of women because otherwise, they would be missing out on much of the talent. From my experience, women tend to be more collaborative and better communicators. Women also bring a more human side to the business, which changes the dynamics of a project in a good way. It is obvious to my male colleagues that we, as women, have something to contribute and it is a plus to have us around. Women are welcomed in mining, but the industry has not fully succeeded in showing that.

Mining is still seen as hard rock mining and unsophisticated, which isn’t true! Yes there are some jobs that still require more strength, but most jobs are mechanized and the industry has become very sophisticated and technological. I can compare us to the construction industry, which, like mining, suffers from the same image problem that needs to be broken. What we also need to put emphasis on is the variety of jobs that mining provides such as in communications, environment, health and safety, HR, engineering, accounting and even nursing! We’re not doing such a great job at representing the variety and opportunities for women in mining. The women that are in the industry can be good witnesses of these opportunities and we should encourage them to be ambassadors of our industry.

When someone came to me and asked me what they should do to advance in their careers, I told both the men and women that if they do their job as if it were the most important job in the company, they will become important and people will notice them. I say that through my own experience: I have always been very dedicated.

You have to be very confident that the fact that you are a woman is not going to hinder you; on the contrary. It might happen that you are going to feel, rightly or wrongly, that you are not getting that promotion because you’re a woman, but I would suggest not to dwell on the negative side and rather to challenge your boss and ask where you can improve! It all comes down to attitude.